It’s fairly common to have a data structure that is occassionally mutated but often read, with the writing and reading occurring on different threads. This type of scenario can arise during intialization or in a loading phase. A bunch of data structures are built, with potentially many mutating threads, and from then on (or for the next long while) are only read, again potentially from many threads. The usual ways of dealing with this are reader-writer locks, or occasionally a lock-free approach, or perhaps even RCU.

A while ago I wondered if there were other generic, efficient ways to deal with this scenario, and I happened upon the very interesting so-called Left-Right construction. I thought it was so nice I’d even resurrect my blog to describe it!

Left-Right to the Rescue

Left-Right is a genuinely new way to deal with concurrent reading and writing of data structures, first described by Pedro Ramalhete and Andreia Craveiro (see here for a paper). After I first read about it, I decided I’d throw together a little C# implementation, as one apparently didn’t exist. I must also say that Pedro Ramalhete was extremely helpful and friendly in answering my queries about Left-Right.

But before describing how the Left-Right construction works, I’ll motivate things a little by revisting a simpler generic solution to the problem of concurrent reading and writing of a data structure, namely lock-free copy-on-write. There are other examples that could also be used to motivate things, like an optimised reader-writer lock. Copy-on-write is handy to describe because it’s fairly self-contained and has similar-ish progress guarantees to Left-Right, and perhaps most importantly it is similarly an extremely general construction.

Making a data structure thread-safe via copy-on-write simply copies the entire data structure when a write occurs. This sounds expensive, but in some situations where the read-path latency is critical, it can be justified.

For a single writer, and many readers, an example of copy-on-write is something like this:

This is neat in a few ways:

It also has some disadvantages:

For workloads that are not overwhelmingly writers or larger lists, this scales very poorly indeed. In fact, simple blocking completes more quickly as we’ll see next.

A Micro-benchmark of Copy-on-Write

To get a slightly better feel for how copy-on-write behaves, a micro-benchmark can tell us a little. The graphs below compare three simple list implementations:

The following two graphs show some of the higher percentiles for the latency of an operation (either a read or write) on the lists, for 4 threads, a 100-element list and a workload of 95% reads (left), and 5% reads (right): 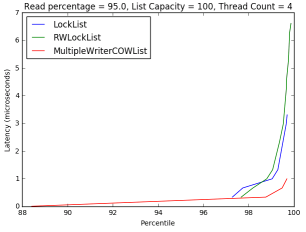 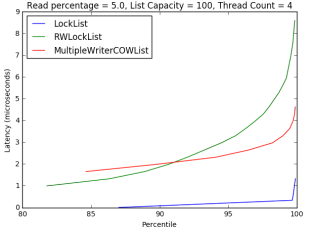 Looking at the left plot, the copy-on-write approach fairs quite well. The right plot reminds us how much copy-on-write depends on the number of writes being comparatively small though. Incidentally, the fact that the reader-writer lock is so bad is interesting too, but a topic for another day!

Next we can look at how copy-on-write scales with the number of threads involved, jumping up to 20 threads, things don’t go well for it: 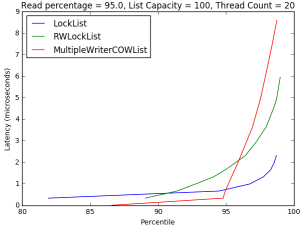 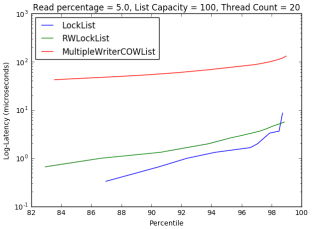 The left plot shows something any lock-free algorithm is vulnerable to: outliers. Lock-freedom guarantees some thread makes progress at each step, but makes no guarantees about fairness or starvation. In the case of the left plot, above about the 95th percentile, the blocking list (“LockList”) has lower latency. On the right, the setup is the same except it consists of only 5% reads. In this case, the y-axis is the logarithm of latency. In other words the copy-on-write list is a scaling disaster.

The last obvious knob we can turn is the capacity of the list in question. The copy-on-write list must do more work the larger lists. Switching to 1000-element lists with 95% reads for 4 threads (left) and 20 threads (right) shows the copy-on-write list again is vulnerable to outliers, more so than a trivial fully blocking list (“LockList”): 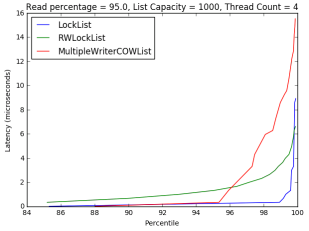 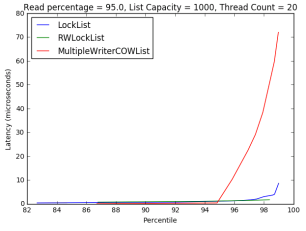 Aside from the latency distributions, we can look at the throughput of the various types of list: 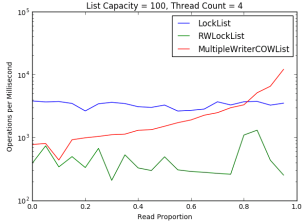 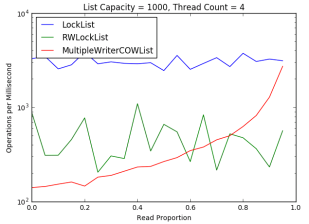 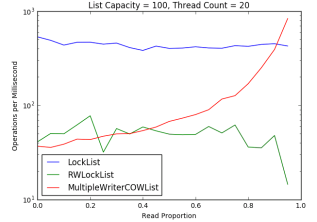 The four graphs above show that for a 1000-element list, the copy-on-write list is always lower throughput than simpler blocking “LockList” alternative (again, why the reader-writer lock is so poor is a topic for another day!). Moreover, its throughput is only higher for a small, 100-element list for workloads that are overwhelmingly writes.

All the same, copy-on-write can still be attractive in the case where there is just a single writer. In that case, there is no question of outliers due to multiple writes competing (although they might still occur if the data structure was large).

It seems natural to wonder if there is some intermediate solution between reads being as cheap as in the single-threaded case, and writing involving copying the entire data structure. That is, is there a solution where reads involve more work than copy-on-write, but writes require less. It turns out that the Left-Right construction is an example that fills this gap.

A First Look at Left-Right

A write operation would always write to both instances, but it would only write to an instance when it can be certain that no reader is reading that instance.

This is basically the first idea of Left-Right. The remaining details are the ingenious mechanism for coordinating reading and writing threads cheaply and with strong progress guarantees.

Some disadvantages of Left-Right are:

This post is getting a bit long, but hopefully it has piqued your interest in Left-Right!

There is an evolving landscape of solutions to the type of problem addressed by Left-Right (as well as simple old copy-on-write). If you’re interested in an overview and a ‘state of the art’ approach, Chen et al’s 2016 paper Fast Consensus Using Bounded Staleness for Scalable Read-Mostly Synchronization is a great read.

On the off chance you’d like to see the (not very nice!) bench-marking code used for copy-on-write it’s available at https://github.com/nicknash/COWBench

2 thoughts on “Reading While Writing Without Waiting”